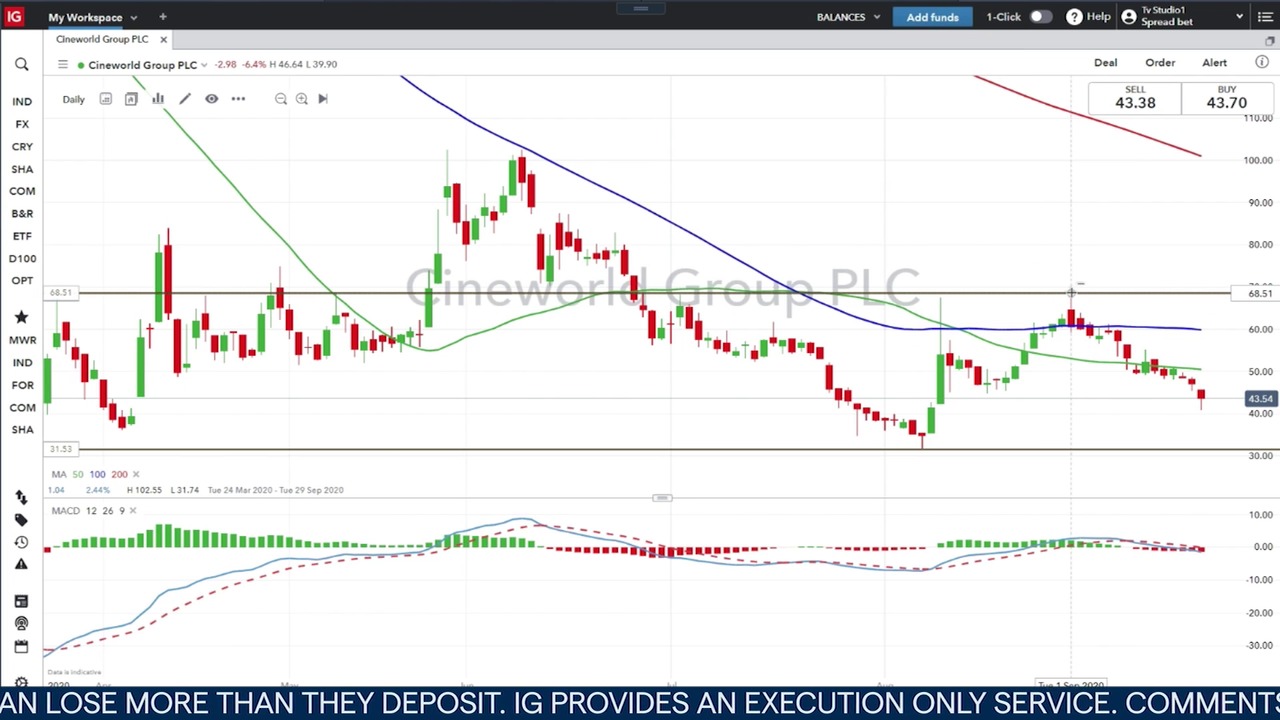 When are Cineworld’s H1 results to be released?

Cineworld will release its H1 results on Thursday 24 September. These results will cover the first six months of 2020.

Cineworld H1 preview: what to expect

Cineworld’s H1 results will be the first chance for investors to find out how theatres have performed since being reopened and how eager audiences have been to return to the big screen.

The company has 787 cinemas spread over 10 countries and it began to welcome back customers in its smallest markets, such as in Poland the Czech Republic, in the middle of June, but it only began to reopen sites in the UK and Ireland at the end of July.

Still, the main focus is on the US, which accounts for over 75% of its earnings following its acquisition of Regal Entertainment in late 2017. It began to reopen US theatres where it could in the first half of August but, as lockdown measures are being managed on a state-by-state basis, many still remain closed – including in major states like New York and California.

We have not had much of an update from Cineworld since it reopened sites, but chief executive Mooky Greidinger told CNBC late last month that many showings had sold out and that customers had returned and felt safe thanks to its measures it had taken to protect against the spread of coronavirus.

This does, however, mean screenings are being run at reduced capacity – possibly at just 60% of pre-pandemic levels – which means sold out showings do provide some confidence that demand is there but are not as impressive as they first seem.

The fact the film slate continues to take a battering will not have helped Cineworld and other theatres in recent weeks. Christopher Nolan’s film ‘Tenet’ has been the only blockbuster release since theatres reopened and the performance has been fair but far from inspiring.

The film, which cost $200 million to make, is thought to have grossed just over $250 million worldwide so far. But many other major titles have been delayed or pulled from the schedule entirely – with Disney deciding to exclusively offer its latest hit Mulan to subscribers of its streaming service Disney+ and cut out the big screen altogether.

The problem is that cinemas need audiences to return to give film studios the confidence to release their big titles, but they need the blockbusters to encourage people to return. This catch-22 could continue to harm Cineworld and the rest of the industry this year and there are fears that the rest of 2020’s big hitters – like Wonder Woman 1984 and the latest Marvel film Black Widow – could be delayed.

One reason a strong recovery is particularly important for Cineworld is its heavy debt load. It ended 2019 with $3.5 billion in net debt and that figure stood at over $7.6 billion when lease liabilities were included, which meant leverage was considerably higher than its 3x adjusted earnings target.

Still, after securing extra liquidity in May, Cineworld said this would ‘provide it with sufficient headroom to support the group even in the unlikely event cinemas remain closed until the end of the year’.

The threat of closure has not gone away. Cineworld’s CEO has already conceded that it has missed out in those US states that remain closed, and the threat of a second lockdown is growing for some countries that are seeing coronavirus cases rise again. This could be catastrophic for the industry, not only because of the lost business. It could further dent confidence among film studios and encourage them to find alternative routes to market, with streaming sites going from strength to strength during the pandemic. Current estimates suggest Cineworld’s H2 will not be much better than H1 in terms of revenue and earnings.

Investors should also look for any news on the legal battles Cineworld is facing during this difficult time. The main one to be concerned about is with Cineplex, which is suing Cineworld after it backed out of buying the Canadian chain when the coronavirus crisis unravelled. In a separate matter, CityAM reported in August that one of Cineworld’s landlords, AEW, was taking the company to court over rent for its UK sites that has been withheld during the pandemic.

Cineworld H1 results: what does the City expect?

Virtually all of Cineworld’s theatres were shut for more than half of the interim period and only started to reopen after H1 came to a close at the end of June, which means the H1 results will not be pretty. A Reuters-compiled consensus shows analysts are expecting revenue to fall by over 54% year-on-year and push the stock to a loss.

An introduction in Forex