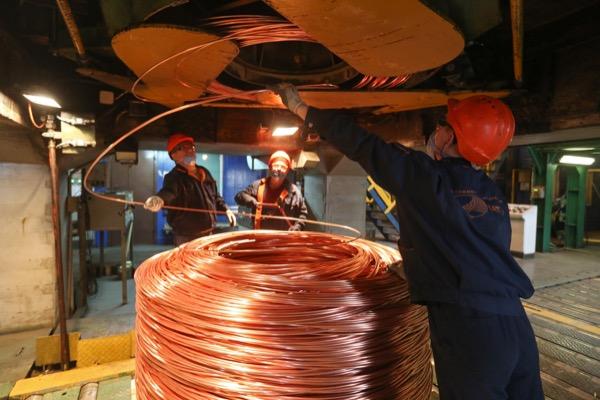 The price of copper has long been used as a yard stick for measuring world economic growth, with rising prices viewed as a strong indicator that a significant increase in global manufacturing and construction will follow.

But while many market commentators believe that the metal will see a ‘supercharged’ recovery in the latter half of 2020, many analysts remain sceptical that the rally could be short-lived.

The copper rally over the past month from $5700 a ton to over $6,000 a ton has occurred against a backdrop of flat to falling equity prices and bond yields, leaving copper looking overvalued by $220 to $420 per ton based on historical relationships, according to Citi analysts in a note earlier this month.

‘Overall, we stick with our very near-term point price target of $5,750 a ton (versus spot of $6,050 a ton) though we see a window for a pullback as the 2 to 4 weeks, and ultimately we recommend buying on dips.’

Saxo Bank give bearish outlook for the red metal

Meanwhile, analysts from Saxo Bank offered a particularly dim outlook for copper prices, contending that investors were far too willing to believe that the global economy will return to normal in the latter half of the year despite lockdown restrictions easing.

‘Copper’s recent recovery to pre-pandemic levels will challenge the metal’s ability to reach higher ground in the third quarter,’ Ole Hansen, head of commodity strategy at Saxo Bank, said in a note.

‘A recovery in Chinese demand combined with supply disruptions at mines in South America were the triggers that finally forced speculators back into long positions following the break above $2.50/lb,’ he added.

‘The risk of a second wave — especially in the U.S. and China, the world’s two biggest consumers — may force a rethink and we see no further upside during the coming quarter.’

Copper: A ‘V-Shaped’ recovery and beyond

The accelerating spread of Covid-19 in Chile, the largest producer of copper in the world, is driving the price of the industrial metal ever higher. Chile has in excess of 336,000 confirmed cases of the virus and the spread of Covid-19 amongst the mining community is causing production hours to be lost, straining the ability of producers to meet increasing demand. Chile accounts for more than 25% of global copper supply, according to Nick Cawley, strategist at DailyFX, part of IG Group.

‘The technical outlook for copper remains positive despite the industrial metal already rallying to a 15-month high from mid-March this year,’ Cawley said. ‘All three moving averages point higher, while the 50-dma has crossed the 200-dma to form a ‘golden cross’ a positive technical set-up.’

‘The chart shows copper making a series of lower highs from the March 19 low, underpinning the move higher, while a break and open above the recent high at $6631/oz. would confirm positive sentiment going forward, he added.

How to start forex trading business in Australia Daily Scanner